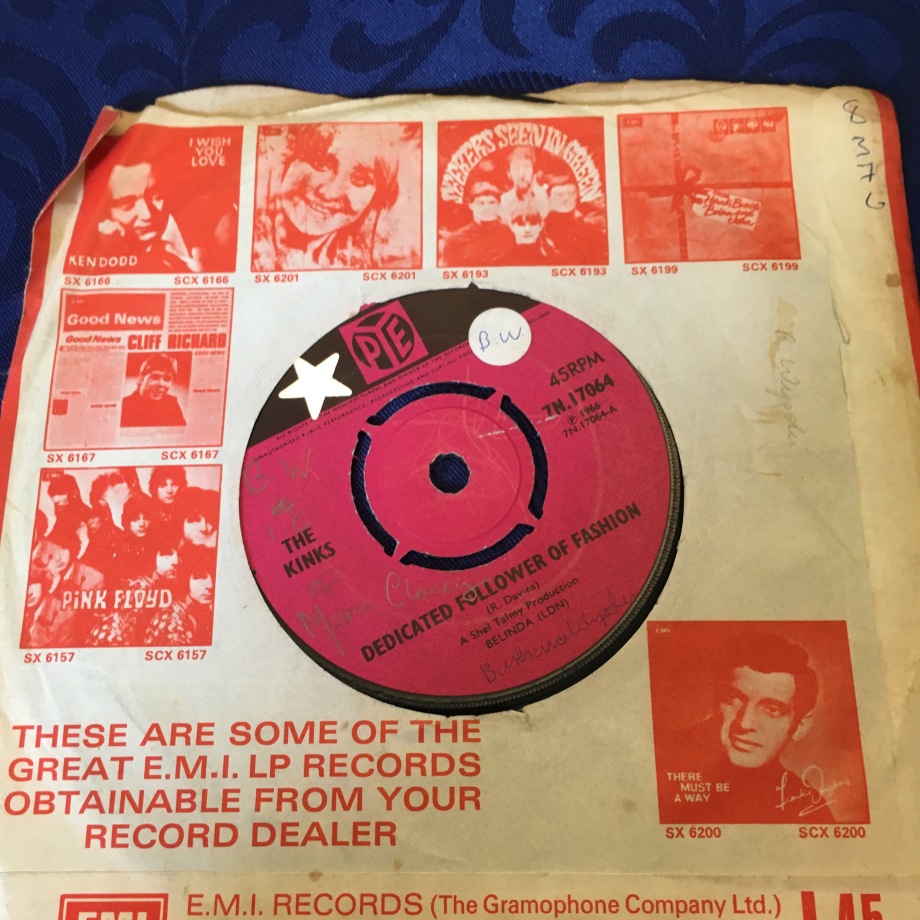 The very first record I ever bought.  It cost 6 and eightpence, and you could get three singles for a pound.  I didn’t have a pound so I bought this one – or at least I persuaded my mother to buy it for me.  I used to play it over and over again on our enormous gramophone, interspersed with my stepfather’s records from the fifties, most of which I have today, too.  There are not many of them,but this is the one that is most meaningful to me. i knew all the words and sang along heartily.  We used to live near the King’s road then and it was always my hope to see Ray Davies and other pop stars as we did our weekly shopping there.

I was lucky only once when I was rattling a tin for a charity one Saturday and Herman of the Hermits emptied his pockets into my tin.  I was overcome with emotion and could hardly blurt out thank you, let alone ask for his autograph which is what I really wanted to do.

I  notice now that I have taken a photo of this record,  that it is not in its rightful sleeve. The sleeve maybe somewhat newer, though the eclectic mix of artists advertised gives cause for wonder.  When was the last time Pink Floyd and Ken Dodd shared a patch?

I went to see the Pink Floyd exhibition at the V and A  last Wednesday, and there certainly was no mention of Ken Dodd! Nor was there any mention of Syd Barrett having lived in the same house as me in 1968, although that has been documented elsewhere! The exhibition itself was very interesting – for the first time ever I agreed to put the head phones on as we wandered round, and it was just as well, as the music and explanations actually added greatly to the pleasure and understanding of it.  The best bit for me was that I actually began to listen to the music.  Fifty  years on, or thereabouts, but maybe I am finally beginning to catch up a little.  I had even bought Jacek the digitized LP for Christmas.  This weekend I listened to it!

There is something very nice about listening to real records on a Saturday afternoon. Not just nostalgia – because for me the music is usually quite new, but he act of having to get up, balance the needle, etc is genuinely pleasurable.

2 comments on “Dedicated follower of fashion ”