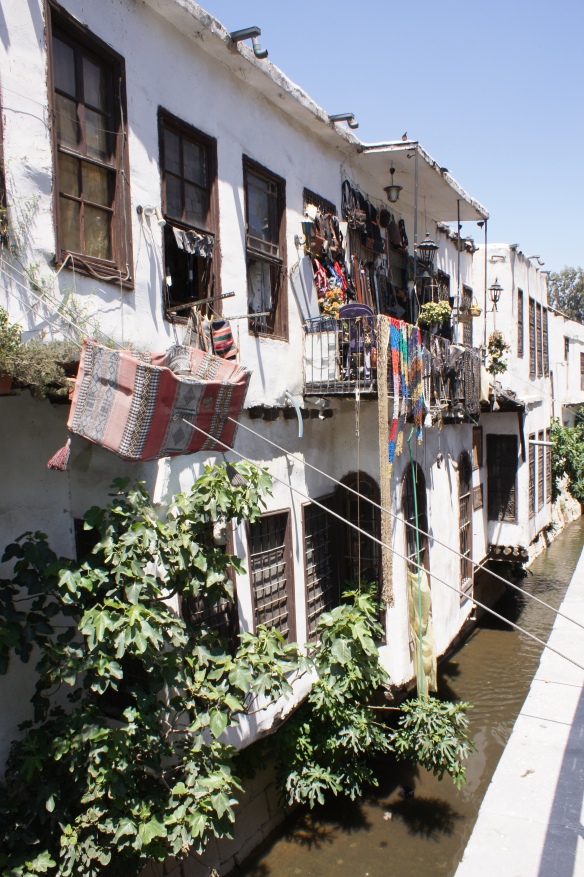 Eight years ago my husband and I went on a whim to Damascus. It was our wedding anniversary, and usually we go to Paris, but something pulled us a bit further away. It seemed like a crazy thing to do – we arrived at four in the morning just as dawn was breaking  and knew that we would have to leave in less than 48 hours as the May bank holiday was not really long enough. But I was so glad we did – in view of subsequent events we have not been able to return.

We arrived at our Turkish (best value) hotel at about 5:30 in the morning. We got out of the taxi to be warmly greeted by a doorman and an airport style search.  We immediately noticed that our hotel was well guarded by an army base next door.  But we were sleepy, so were ushered  through the electronic equipment quickly and found our way to the room which was luxurious and inviting.  Especially the bed. We slept till eleven (this had been planned)  and then went out exploring.  The Syrian Embassy in London had been extremely helpful, especially about the customs and traditions pertaining to women, (not onerous at all, as it happened) and so we set forth, camera at the ready.  Jacek took the pictures as always, at my insistence.   So I can take some credit!  This was the first scene we saw.  People lowering and raising baskets of provisions over the ditch or stream, through their windows and into their houses. We stood mesmerised for a few minutes – it was the start of our biblical journey into the past, yet very much in the present. 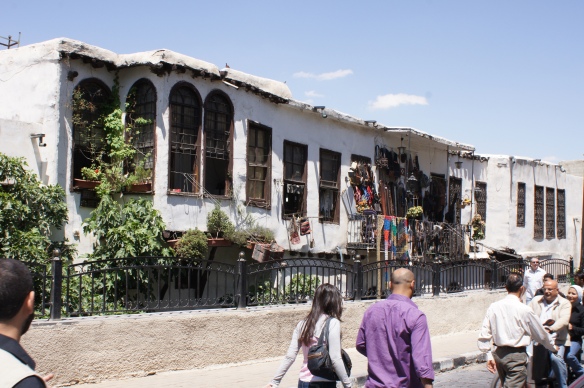 We walked on and came across this man selling his carved goods on the pavement. This was the first sign really that times were hard, but not yet dire.  But we were in the centre of the city. People watching is the favourite pastime of many a tourist or traveller as sometimes we prefer to be known , and so we stood and watched. Most interesting for me was the way the women were dressed.  Many were in western clothes, hair uncovered but rarely sleeveless. Most men would not have looked out of place anywhere in Europe. jeans, hoodies, sweatshirts etc.  But then there were the young women, many of whom wore burkas and head scarves.  Some covered their faces entirely. Not surprising at all, until from time to time you noticed some very young ones who were very fashion conscious.  For modesty’s sake they dutifully  wore  a black  hijab over which they pulled all sorts of  modern western fashion garments.  Boob tubes, miniskirts, little dresses, all brightly coloured.  It was delightful to see the cleverness with which they had put their outfits together, bridging both worlds very successfully.  We couldn’t take any photos of them, of course, it would have been too intrusive. 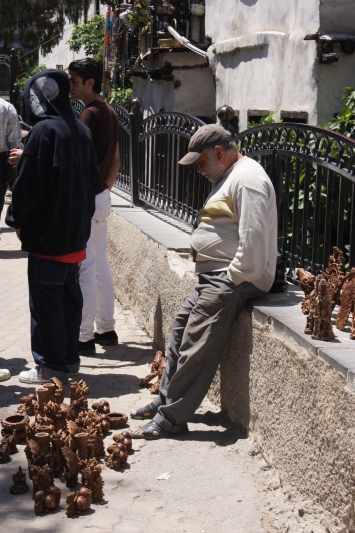 But why am I writing about this today, 8 years after the event? So far I have given you only the first glimpse of what we saw.  Everything was so thrilling, so interesting and so incredibly moving.  There we were, in a place which two thousand years previously St Paul had had his “moment”; where he had been at the cross-roads of his life. Without going into too much dramatic detail, or even comparing what I am going through with what he suffered, I too am going through a small Damascene moment.  In ten days time I will stop teaching, after forty years – but I am not ready to retire.

While trying to think about my future I was looking at these photos and realised that I could no longer put off writing about that experience, where the past met the present and violently exploded into the future.

I believe the photo below is of St Paul’s Gate in Damascus.  Please correct me if you know better. 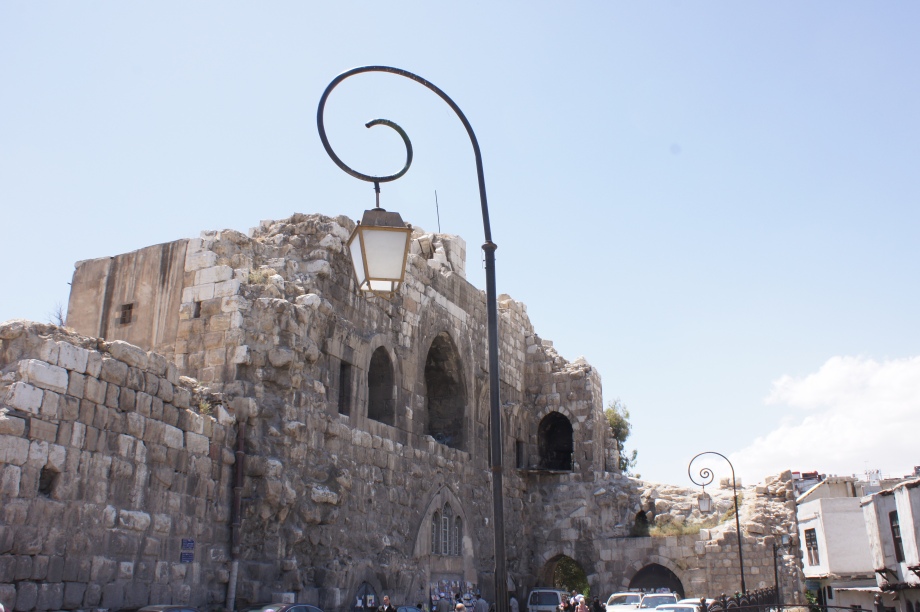