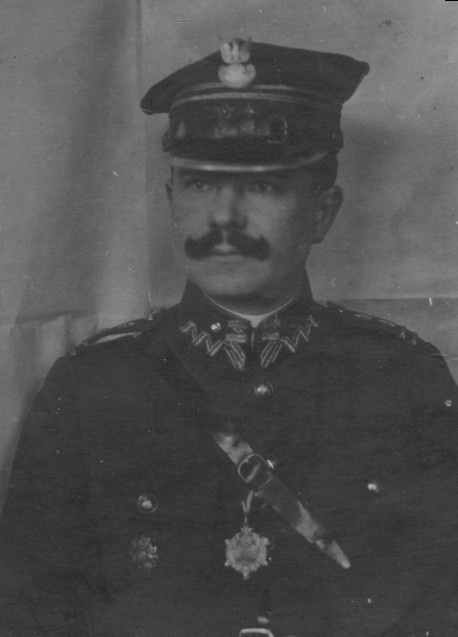 This is my grandfather as I never knew him.  He was born in 1878 and died during the Second World War, a captive in Siberia. His story is a very interesting one, but one which I shall leave for another day.

Today I was thinking about him as I was wrapping parcels to send to my daughter in Bolton.  All her clothes, in fact:  three enormous boxes.

As I was securing them with brown tape I was remembering how my father, when I was very small, used to send lots of parcels to Poland. We used to go to the post office in the North End Road together, and I always used to feel very proud and important because my finger was the one to hold down the string before the knot was tied and the sealing wax poured over it.  It was quite a ritual, and I remember when I was older, my father telling me the story.

After the First World War my grandfather had been pensioned out of the army at a relatively young age.  Conditions between the wars  in the early thirties were not bad in Poland, provided you had enough money.  Lwów, where they lived, was a major cosmopolitan town and every pleasure was available.  My grandfather had  invested his pension in a match factory and received a decent income. But – he had a wife,(my grandmother), and three sons to feed.  As well as a servant.

That would have been quite manageable, I believe, if it hadn’t been for the demon boredom.  There was nothing for my grandfather to do in the factory so he spent his time enjoying cafe society.  Good coffee, brandy, wine and then, in lieu of conversation – cards. He became a gambler – and as is the wont of many, he lost more than he won.  For a couple of years before the war, my father said, they had absolutely no money at all.  My father would be sent to the races to become a tic-tac man and so earn some money from the bookmakers there.  His father would be waiting from him on his return in order to scavenge the few zloties that he had made. So that he could gamble them away again.

This lasted right up until the war broke out.  As my father said, his mother had not had a new dress in years, the servant had not been paid for months and they had been living on cheese and potato pierogi – the cheapest dish all the time.

February 1940. They were all deported to Siberia  – first Gustaw and and then the three sons with my grandmother.  The servant stayed behind.  She was not an enemy of the people.  Fortunately. My father was  eternally grateful to her because despite not having been paid she was incredibly loyal to the family, sending them parcels of flour and sugar and lard to their place of starvation  in exile.

Eventually my grandfather died in prison, and my grandmother, father and his two half-brothers were released from their ordeal after the so-called Amnesty of 1941.

My father ended up in England and by the time I was born he had managed to contact almost everyone he had known in Lwów before the war:  his schoolmates, his relations, Zosia the maid, and his grandfather’s creditors.  Maybe the latter  had tracked him down.  Who knows?

And this is where the parcels came in.  For many years my father felt honour-bound to repay his fathers debts, as far as he could.  Conditions in Poland were pretty grim for everybody in the fifties (I don’t think they were brilliant here either, but possibly better). So he would buy goods that were useful in Poland, that could be sent by post, and so he would send something to someone almost every week.

I have no idea how much it cost him – he was still a student for much of my early childhood, with me, my mother and two grandmothers to look after – he received a monthly  grant, but still had to work hard to supplement his somewhat meagre income.

But I used to enjoy the wrapping and the holding and the sealing and the visits to the post office.  Only later did I realise what an admirable thing my father had done.

Please feel free to comment or to ask questions – thank you.