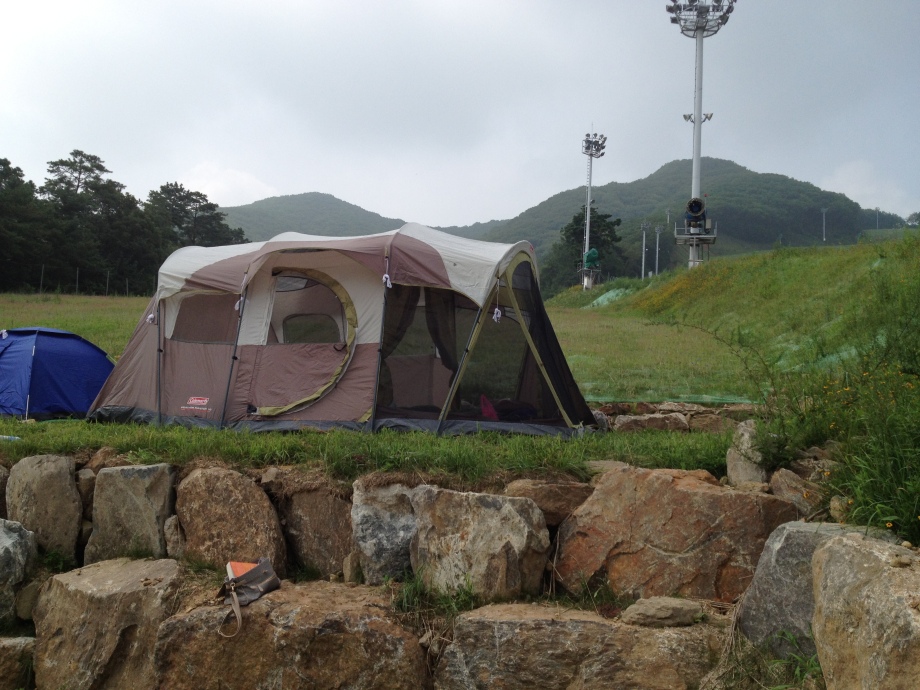 I am not a natural camper. I can count the number of times I have attempted this activity on the fingers of one hand. (I’m not counting the outrageously luxurious glamming I have enjoyed in Uganda and Tanzania.) just the times I have agreed to sleep in a tent. Or even in a car.

The first time I was about ten or eleven. I was staying with friends of my mother’s in Wales -,I’ve written about Brecon and Llanddew before, and I loved going there. It was such a completely different world from my limited existence in London. So when it was suggested to me that we go camping I agreed. I knew no better.

The tent was set up, we were given a torch and sleeping bags and tried to go to sleep. It was weird. Very dark. Noisy. Windy. I think it was just Ewa and me in the tent. I imagine I was very scared. I can’t actually remember. I missed my mother, more because I knew she had gone to Poland for the first time after the War. She had left unwillingly as a ten year old in 1940. Now it was 1964. She was brave going back. I was brave in the tent.

We were just dropping off when we heard calling. Basia. Basia. Get up. Your mama is on the phone. Oh my goodness. The excitement. I could hardly untangle myself from the sleeping bag. We were actually in the kitchen garden a few hundred yards from the house. As far as I was concerned it was the other end of the world. It was damp and nettly and I couldn’t keep up with Babunia who had come to get me.

Eventually we reached the house and the phone and my mother crackling on the other end of the line. I just wanted to cry. So did she, probably. She had had to book the call days in advance. And here I was with nothing to say. Disaster. Babunia led me back to the tent and the next day we came back to the house.

I can’t say I was thrilled with that particular experience

Three or four years later my mother had the brilliant idea of making me become a Polish girl guide. What better way than to send me away to a guide camp with girls I did not know, without a uniform, without a bathroom or a toilet. I had to share a tent with three of these Amazons and lots of creepy crawlies. And a gaggle of geese tried to come in in the morning. We had to dig latrines and cook a meal and then the only good bit: The campfire. Generally speaking, dreadful. But luckily my mother’s friend, Lodzia Stein, the most important Guide there, took pity on me. Wonderful woman, she saw how distressed I was and asked if I wanted to go home with her to Birmingham. We won’t tell mummy she said. So I went and had the most wonderful fortnight ever. She had a son who was a little bit older than me and he showed me the sights of Brum, especially Erdington. He had loads of friends and cousins and I had a great time. They even made me pretend to be 18 and took me clubbing. To a place called the Chesterfield. It will be forever engraved on my memory.

After a week I rang my mother and though she was a bit disappointed I did not want to join the Guides she at least was pleased I was having a good time.

Then four years later I was eighteen. And oh, so grown up. And oh, so in love. And oh, so crazy to want to go camping again. This would be better, I thought. The opportunity had come up to go on a six day trip to Scotland and back in a little car. Two boys and two girls. My father was not pleased but I was eighteen – I could do as I liked! I rang him from a coin box in Edinburgh and only put in one coin – just enough to tell him where I was and was safe. (My mother was fine with it – she knew the boys.)

Everything was fine apart from the fact that we had no money to speak of. £6 each to spend on petrol, food and incidentals. Not a lot even then (1971). The boy whose car it was had been born in Irvine just after the war and he was going to find his birthplace. In effect we were helping him with his costs. He had a tent – for two. He and the other guy slept in it. Ania and I slept in the car. We couldn’t afford camp site fees so we slept in laybyes and fields. We didn’t wash. They had brought tins of food and a kettle. It was so uncomfortable. One day we found a disused campsite. It was pouring with rain. We cooked our meal in the shelter of an old toilet. But the journey was spectacular. We saw York and the Lake District and even went to visit a very old msn in Edinburgh. He insisted on us staying he night. Finally a bed. But he had no food. Only a bottle of vodka.

We were very hungry so we decided to go in search of food. Ended up in a pub where we feared one pint of beer and a snack.

So that experience ensured I did not go camping for a very long time.

Then my eldest daughter went to live and work in Korea. And she wanted me to come and visit. I’d been once already so this time she thought it would be nice if I went to a rock festival with her. Well, before I knew it, I had agreed. Then she sprung on me the fact that we would be camping. In a tent.

I took a deep breath and honoured my promise to go. I bought wellingtons and pyjamas and began to look forward to it.

An eleven hour flight quickly followed by a two hour car ride with a delightful young American friend. We had arrived. It was a ski resort therefore very hilly. It was also very hot. I was very tired. We went to listen to one of the acts. I was extremely tired and jet lagged. Kasia assured me that the boys would set up the tents. She had brought a little one. They luckily had brought enormous one. And they did indeed put it up. It’s the one in the photo. They asked if we wanted to share it. Our little one was very claustrophobic. So we gladly took them up on their offer. Trouble was, it was on a ledge. And I, with my ungainly 59 years, couldn’t climb up into it on my own. So, so embarrassing. The young men were real gentlemen, however, and managed to manoeuvre me in and out whenever necessary.

It wasn’t too uncomfortable actually, but I didn’t really get much sleep. Western music till two in the morning then K pop blaring till the early hours. Not to mention some drunken snoring emanating from the other side of the tent.

Yet it is an experience that I really treasure. It was the first and only music festival I have ever been to. I was the oldest person there – I spent a lot of time looking for someone my age- but it didn’t happen. What was nice, however, was that Kasia’s friends all looked after me – they even found me a chair to sit on so I would be comfortable!

No wine was available so I had to be convivial on Coca Cola and three days of junk food; also an experience. I didn’t have a shower – you had to wait in 40 degrees sun but the toilets were pristine.

But I had a fabulous time. No, I will not go camping again. Please don’t make me!